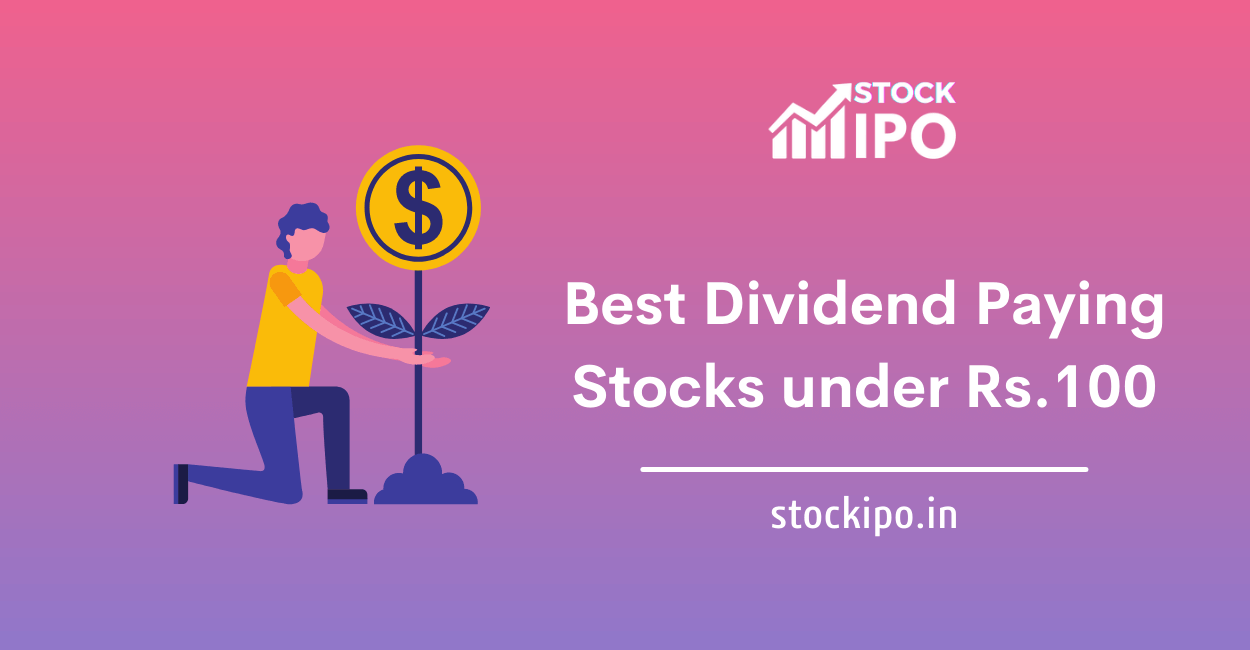 During extreme volatility in the stock markets, investors can experience losses (not booked) in their portfolios. During these times, high dividend paying stocks can come to one’s rescue. These stocks have high dividend yields, which in some cases exceed returns earned through fixed deposits.

These high dividend yielding stocks can provide regular income to investors even in times of distress. Thus, in today’s article, we’ll discuss some of the best dividend paying stocks under ₹100 that can be considered in 2022.

Following are the best dividend paying stocks under ₹100 in 2022:

Based on the current market price of ₹30, the dividend yield turns out to be 7.32%.

At the current share price of ₹35, the dividend yield turns out to be 7.13%

IRCON International Limited was incorporated in the year 1976 and is engaged in railway construction. The company specializes in execution of railway projects on a turnkey basis. The company provides services such as project management consultancy, engineering, procurement, and construction, and real estate. The railway sector contributes to about 81% of the company’s revenues, whereas the rest comes from the highway segment. Also, the company earns 92% of its revenues from domestic projects and the rest 8% from international projects.

Housing and Urban Development Corporation (HUDCO) Limited is involved in the business of financing housing and urban development projects in India. The company comes under the ownership of the Ministry of Housing and Urban Affairs. The Government of India holds a majority 89.81% stake in the company.

National Hydroelectric Power Corporation (NHPC) Limited was incorporated in the year 1975 with a mission to promote the efficient development of hydroelectric power. The company later expanded to other sources of energy such as solar, tidal, wind, and geothermal. The Government of India and State Governments hold a 74.51% stake in the company while the rest is held with the public. The company has 24 power plants across the country.

Calcutta Energy Supply Corporation (CESC) Limited comes under the ownership of the RP-Sanjiv Goenka Group. The company is involved in the distribution of power along with an embedded generation facility as well. The company’s power distribution business is spread cross West Bengal, Noida, Rajasthan, and Maharashtra. The company has a power generation capacity of 2500 MW.

Indian Railway Finance Corporation Limited was established in 1986 as a dedicated borrowing arm of the Indian railways. It is a registered NBFC with the RBI. An interesting thing about this NBFC is that it has zero non-performing assets as it lends only to the Government of India (GOI). The company makes a return on equity of 14%. The current loan book size of IRFC limited is ₹3.8 lakh crores, which could increase by ₹8 lakh crores by 2025. The government has an 86% stake in the company. The company can continue to grow its books in double digits over the next five years as investments in railway infrastructure picks up.

Rail Vikas Nigam Limited was incorporated as a public sector undertaking in January 2003. The company was formed with an objective of implementation of projects relating to creation and capacity augmentation of rail infrastructure and raising of extra budgetary resources for SPV projects. The company is listed on the stock exchanges after the government divested its stake of 12.16% of the company through the IPO. The company has a market capitalization of ₹7000 crores.

Provided above is a list of some of the best dividend paying stocks under ₹100. Investors wanting to earn regular income in the form of dividends can look upon these stock