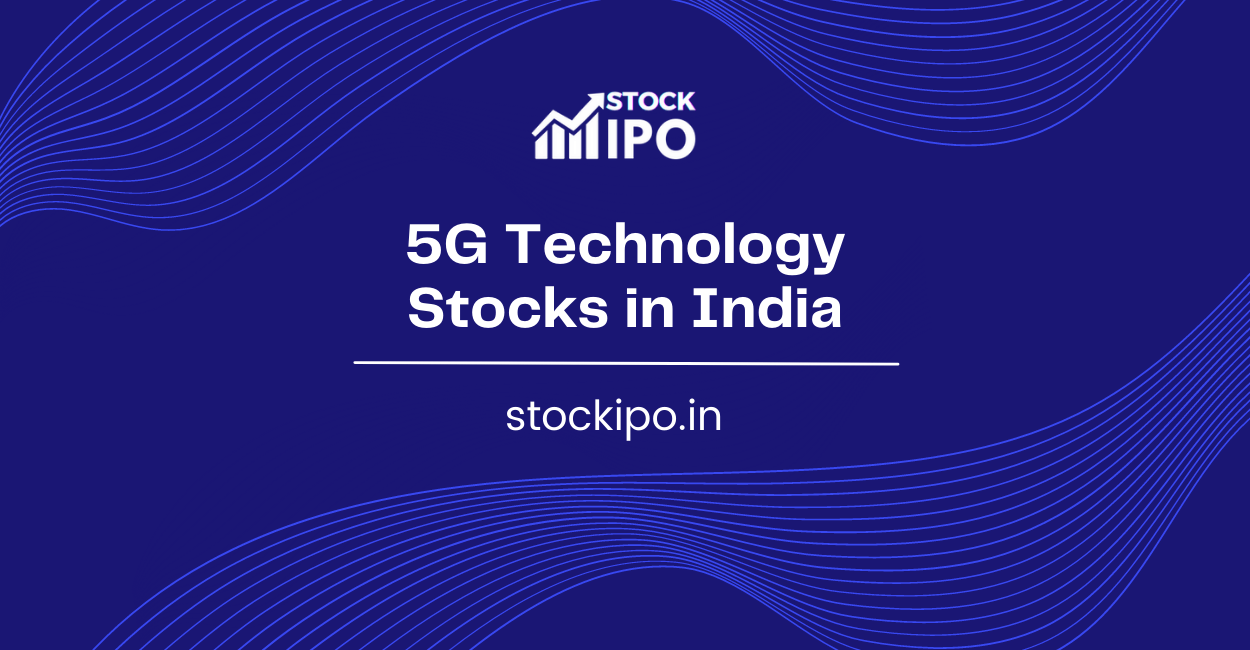 The world has already endured 5G networks. The people in the US and the UK are already enjoying high network speeds. While in India, the wait is going to end in a matter of months. The 5G spectrum auctions are going to take place in India in the later half of 2022. So in this article, we will give information about best 5G technology stocks in India, which will help you to get good returns when the 4G era comes to an end and 5G stocks emerge.

According to some media reports, there was a tussle between companies on the aggressive pricing of the spectrum waves by the government. Companies such as Bharti Airtel said that the government needs to reduce the spectrum pricing to a huge extent, failing which the company will be unable to participate in the auctions due to financial constraints.

But whatever is the case, Time is tickling and the 5G auctions will definitely take place. And there are many companies through which investors betting on the future of 5G can have a pie of the profits. So here are some best 5G technology stocks that investors can own to ride the upcoming 5G wave in India. Also, you need to check company fundamentals before investing, check this article here we have the best guide to do stock fundamental analysis, and this will help you to come up with the right decision in terms of investing.

Below are the top 5G technology stocks to invest in India

Bharti Airtel Limited is a leading Indian telecommunications company. The company operates in more than 18 countries and has major operations in India and Africa. It is the second-largest mobile operator in India after Reliance Jio. From a variety of telecom companies in India in the last decade, the industry has consolidated to just three players currently, which are Reliance Jio, Bharti Airtel, and Vodafone Idea Limited.

The company saw an 11.4% growth in its customer base which totaled 471.36 million in FY21. Last year, the company conducted trials for the 5G network in Kolkata in partnership with Nokia. The company will join global giants such as Accenture, Amazon Web Services, Google Cloud, and Tata Consultancy Services Limited in the league. In Q3 FY22, Bharti Airtel was the only Indian telecom company that gained revenue market share.

Further, the tariff hikes in mobile data packages scheduled for 2022 will increase the company’s Average Revenue per User (ARPU) and make it a strong 5G candidate. The company’s current market capitalization stands at ₹4.14 lakh crores.

Indus Towers Limited is a leading Indian telecom equipment company. Both Bharti Airtel Limited and Vodafone India Limited hold some stake in Indus Towers Limited.  The company holds the rank of being amongst the top 5G towers company globally.

The company has over 1,75,000 towers at 3,18,300 locations and a pan-India presence covering all the 22 telecom circles. The company has a tower market share of 31%. All the leading Indian telecom players are its customers.

The company’s current market capitalization stands at ₹54,600 crores. The company’s return on equity stood at 24.6% for FY21. The company also provides a good dividend yield of 10.04%. Also, promoters have pledged 40.26% of their holdings in the company. The company’s five-year compounded sales growth was 20%, while net profits grew at a 13% CAGR over the same period.

As in all other segments, Reliance Jio also wants to be the leader in the 5G space as well. The company has developed a 5G solution that is fully cloud-native and digitally managed. Jio has partnered with Qualcomm to manufacture critical equipment for the 5G ecosystem in India. The company’s current market capitalization stands at ₹17.05 lakh crore. Its net profit margin stands at 9.87%.

Jio launched its entry in India in September 2016. With its predatory pricing and dirt cheap data prices, it was able to woo customers from other telecom players, who are bearing the brunt of it till today. Hence, it will also be the top contender in the 5G space.

Tejas Networks Limited is an optical, broadband, and data networking Products Company situated in India. The Tata Group has a 43.35% stake in the company so that it can make an entry into the telecom equipment market.

The company’s current market capitalization stands at ₹5028 crores. The promoter holding in the company is 37.32%. The company’s net profit margin stands at 7.13% and the return on equity stands at 3.51%.

The company provides telecom equipment to BSNL, MTNL, and defense. The company also manufactures 5G-enabled devices. The company has contributed to 50% of the present national telecom network in the country.

The company’s current market capitalization stands at ₹11,000 crores. Promoters hold a 90.09% stake in the company. The company’s net profit margin stands at 0.47%, whereas the return on equity is also 0.47%.

Sterlite Technologies Limited is an Indian technology company that specializes in optical fiber and cables, hyper-scale network design, and deployment and network software.

The company has a presence in China, the US, Europe, and the Middle East nations. The company is planning to combine the power of optical, wireless, virtualization, and deployment methodology to build a 5G infrastructure for India and the world.

The company’s current market capitalization stands at ₹10,000 crores. The promoters hold a 54.2% stake in the company. The company’s net profit margin stands at 5.18% and the return on equity is at 12.99%.

Himachal Futuristic Communications Limited commenced its business operations in 1987 and is a leading Indian telecom company. The company serves clients in various industries such as telecommunications, security, railways, textiles, and cable fiber.

The company is building a portfolio of 5G products including 5G radio access network (RAN) and 5G transport equipment. The company is also considering tapping on the ₹1 lakh crore 5G market opportunity in India and through exports to West Asia, South-East Asia, and Europe.

These were some of the top 5G technology companies that investors can bet on to ride with the tech-savvy future of India and the world. Although these companies are gearing themselves up to capitalize on the 5G opportunities and the 5G spectrum auctions that are going to take place later this year, investors should pay special attention to the risk-return characteristics of these companies.

Also, one should pay special attention to the debt levels in these companies as they are immensely high and can become a pain point for the company’s operations in the future if they are not able to repay it. This has happened with Vodafone India Limited, which is still in a bad situation even after the government took an equity stake in the company to make it stay afloat.

The company is now in need of funds and is preparing for another fundraising plan. So it is only after considering these factors should the investors make a decision regarding which of these companies to invest in!

If you want to invest in these 5g stocks, you need to open Demat account in any of the trading apps in India.

Is 5G launching in India?

There is no recent news about launching 5G in India, but yes currently it’s in the testing phase since PM Modi inaugurated India’s first 5g testbed and announced that this technology will be rolled out soon in India.

Which company will bring the first 5G to India?

As per sources, Airtel and Jio will be the first operators to roll out 5G services in India.

Even though 5G launches, 4G wont be replaced anytime soon.