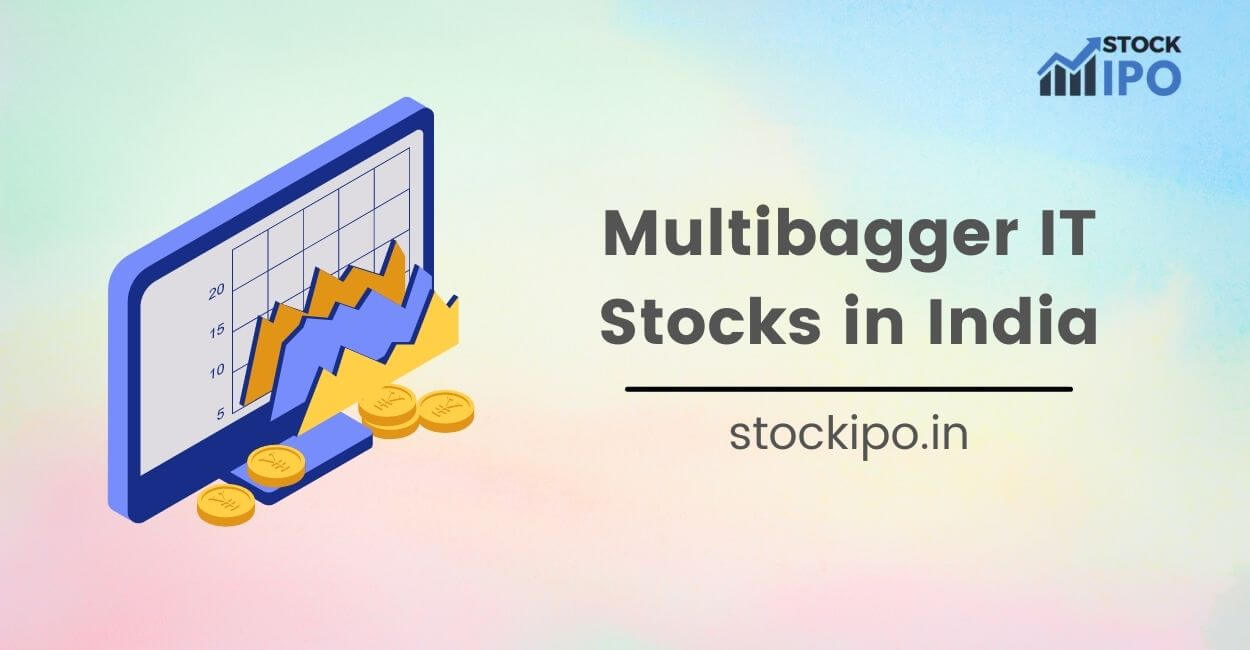 According to a Frost and Sullivan report, the global digital-services industry is expected to grow at a CAGR of 20% to $2.1 trillion by 2025. During the lockdowns that were imposed due to the Covid-19 pandemic, the adoption of digitization got a boost as work had to go on. Even people who were not very comfortable with technology were seen working over zoom calls. And this gave a boost to the revenues and earnings of IT companies across the globe and in India.

India is known as the IT hub of the world. The IT companies contribute 8% to the country’s GDP. In this regard, the importance of this industry cannot be ignored. And if one wants to partner with these companies and have a share in their future profits, he/she needs to own its shares. So today, let us discuss the best multi-bagger IT stocks in India in detail and look at what the future holds for them!

Best Multibagger IT Stocks in India

Tata Consultancy Services is a company of the Tata group. On the basis of industry classification, the company operates in five key business verticals such as BFSI (which accounts for 36% of the revenues), retail and consumer business (which contributed 17% to the revenues), media and technology (contributes 16%), and manufacturing and other platforms (accounts for the rest). The company offers a consulting-led integrated portfolio of business, technology, and engineering services and solutions.

The company generates 52% of its revenues from clients based in the US, followed by 31% from Europe, 6% from India, and 11% from the rest of the world. The company was recently recognized as the second most valuable company based on brand value globally. The company has paid 70% of its cash flows to its shareholders over the last two decades. The company’s average return on equity stood at 37.41% for the past three years.

Infosys Limited was established in 1981 with a modest capital of $250. Today, the company is an NYSE-listed global consulting and IT services company with more than 3 lakh employees. Today, the company has a market capitalization of USD 106.44 billion. The company crossed the milestone of ₹1 lakh crore in revenues in FY21. Infosys was recognized as the third most valuable company after Tata Consultancy Services in terms of brand value.

Wipro Limited, headquartered in Bangalore, is an information technology company that provides consulting and business process services. The company uses computing, hyper-automation, cloud analytics, and robotics to help its clients adapt to the digital world. The company has over 2,20,000 employees and offers its services to customers across six continents. The company initially manufactured vegetable oils, but it later shifted its focus on the IT space seeing its bright future.

Oracle Financial Software Services Limited is involved in providing IT and related services majorly to the banking, insurance, and financial services sector across the globe. The company is engaged in providing services such as BPO and consulting. It has a presence in countries such as the USA, Europe, Asia Pacific, and the rest of the world.

The company’s five-year average return on equity stood at 27.9% and the operating margin was at 29%. The company generated free cash flows in excess of ₹1900 crores. It registered a revenue CAGR of 4% and net profits registered a 0.32% CAGR.

HCL Technologies Limited is the third-largest Indian IT company in revenue terms, only after TCS and Infosys. It was incorporated in the year 1991. The company’s expertise lies in engineering and R&D services, and its end customers are spread across industry segments. HCL Technologies Limited has signed 58 new large deals in industries such as financial services, life sciences, and healthcare. The company has a huge opportunity waiting in areas such as cloud consumption, cyber security, automation, and app modernization.

Coforge Limited is an Indian IT company engaged in providing end-to-end software solutions and services. The company was previously known as NIIT Technologies Limited and was incorporated in April 2003. The company provides AI-based services such as digital business assistants, deep learning, machine learning, image recognition, and workflow automation. The company earns half of its revenues from the USA, 37% from Europe, the Middle East, and Africa, 9% from the Asia Pacific, and 5% from India.

The company caters to segments such as BFSI (50% of the revenues), travel, transport and logistics (20%), manufacturing, media, and others (30%). The company’s five-year revenue growth stood at 11.65% CAGR, while its net profit growth over the same tenure was recorded at a growth of 10% CAGR. The company’s return on equity stood at 19.41% for FY21 and its return on capital employed stood at 25% for FY21. The company had a market capitalization of ₹28,704 crores. The promoters hold a 50% stake in the company.

Mastek Limited was incorporated in 1982. Over the recent years, the company has transformed from an IT solutions provider to a digital transformation partner. The company’s services include application development, ERP and cloud migration, business intelligence and analytics, and digital commerce.

Over the last five years, the company recorded a revenue CAGR of a whopping 33%, while net profits grew at a 63% CAGR for the same tenure. The company’s return on equity stood at 31.44% for FY21, and the return on capital employed stood at 31% for the same period. The debt to equity ratio stood at 0.18x. The company’s current market capitalization stands at ₹7968 crores. The promoters own a 37.59% stake in the company.

Persistent Systems Limited is a mid-tier IT company that provides software engineering and strategy services to help companies in modernizing their businesses. The company has its own software and frameworks and has tied up with providers such as Salesforce and Amazon Web Services. The company has a presence across 17 countries that including India, Australia, Canada, Germany, and Japan.

Over the last five years, the company has registered a revenue CAGR of 13%, while net profit grew at a CAGR of 16% over the same tenure. The company’s return on equity for FY21 stood at 17.66%, while its return on capital employed stood at 23.70% for the same period. The company’s current market capitalization stands at ₹32,759 crores. Promoters hold a 31.26% stake in the company.

Mindtree Limited is an IT consulting and Implementation Company incorporated in the year 1999. The company is a part of the Larsen and Toubro group. The company’s services span areas such as e-commerce, mobile applications, cloud computing, digital transformation, data analytics, and enterprise resource planning. The company has a presence across the US, Europe, the Middle East, and India. The company had a total of 23,814 employees as of FY21.

Tech Mahindra Limited was founded as a Joint Venture between Mahindra and Mahindra and the British Telecom in 1986. The company’s service offerings include network services, engineering services, platforms, digital marketing and customer experiences, and business process services.

The company is a trusted partner for several communication-service providers, telecom equipment manufacturers, and software vendors. The growing adoption of 5G is going to augur well for the company. Tech Mahindra already boasts of designing, building, testing, and operating the world’s first 5G end-to-end cloud-native platform for a Japan-based Tier-1 carrier.

As per a Sharekhan report, the company is poised to benefit from an open 5G network, network on the cloud, cognitive managed operations, digital-operating support system, and enterprise-network modernization.

The company sells its services through multi-year deals with clients such as Microsoft, Amazon and Intel. In FY21, the company’s digital-service offerings accounted for 97% of its revenues. In the last five years, the company has grown its revenues at 17.4% CAGR, with an average return on equity of 32.40%.

Tata Elxsi Limited was incorporated in 1989. The company is one of India’s leading providers of design and technology services across various industries. The company’s portfolio includes artificial intelligence for video analytics, assistance for self-driving cars, quality of experience for streaming platforms, digital health platforms, etc. The company is also working on various demo products such as robotaxi.

Besides, the company provides various other services such as big-data engineering, cybersecurity, test and validation, and product engineering. International clients accounted for 87% of its revenue for FY21. The embedded product design segment contributed 88% to the company’s revenues in FY21. Further, in the last 5 years, the company has registered a revenue CAGR of 13% and a profit CAGR of 22%. The company operates in a well-settled industry that has just started to grow!

Discussed above are some of the best potential IT stocks in India. If one wants to participate in India’s digitization wave, these stocks can be considered. With remote workings due to the Covid-19 lockdowns, cloud adoption is gaining pace. The future lies in artificial intelligence, machine learning, and the internet of things. These are the companies that can become a part of an investor’s portfolio if he/she desires to benefit from this theme!